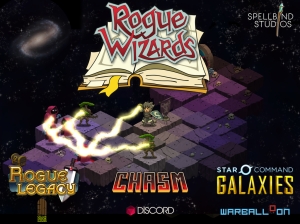 When I started this project over a year ago, I wasn’t just sitting around and thinking “Hey, it’s time to make a video game”. Instead, the idea slowly built up over time while I enjoyed playing the incredibly imaginative games from other developers and began to see more indies build awesome games on their own terms.

The list of games bringing me to this point is simply too long to list here, but there are a few recent titles by independent developers which really pushed these thoughts into the front of my thinking.

Today Spellbind Studios proudly announces planned easter eggs with three independent developers Cellar Door Games, Discord Games, and Warballoon – whose games serve as a huge inspiration to Spellbind Studios. Characters from Rogue Legacy, Chasm, and Star Command will make a cameo appearance hidden somewhere inside of Rogue Wizards, all players need to do now is find out where these secrets are located. 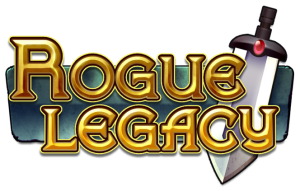 Rogue Legacy by Cellar Door Games describes itself as “A genealogical Rogue-‘Lite’ for PC, Mac, and Linux” and I personally haven’t been able to put this game down. With an absolutely brilliant design mechanic involving the frequent death of the hero and continuing the quest via one of their heirs, each with a randomized set of traits; players will have no shortage of variety each time they attempt to solve their generational quest. A randomized castle for every hero further enhances the challenge while keeping each run fresh and completely unpredictable.

Star Command developed by Warballoon takes place in the furthest reaches of outer space where players build and manage their very own starship and explore the galaxy. Careful management of power systems, weapons, personnel, and diplomacy, ensures there’s never a dull moment on the ultimate frontier. On top of that the developers have a great sense of humor, and the passion and love for this game really shows through. A new version called Star Command: Galaxies aims to even further enhance all aspects of the game and introduces a slew of new features like total ship customization and taking the crew on away missions on the surface of planets.

Chasm created by Discord Games brings 2D Metroid-Vania platformers to an entire new level.  With completely randomized environments, deadly enemies, and a horde of secrets players will enjoy digging deep to unlock and uncover everything this game has to offer.  I’ve been watching this game ever since they launched a Kickstarter and seeing their success has provided me with an enormous amount of inspiration and confidence which have really helped me to realize the potential that can be gained by launching the Rogue Wizards Kickstarter.

Rogue Wizards wouldn’t exist today if it weren’t for the influence of these talented developers, and Spellbind is proud to be able to take a small piece of these gems and incorporate them into Rogue Wizards.