What would a role playing game be without magic?

I’ve always been one to go for the magic users in most of the games I’ve played, but I always thought it was kind of crappy how doing so limits me in some games from other cool stuff like that warrior gear I can’t use just because I wanted to throw around fireballs. Whether there are character classes for specific roles for the upcoming game is still open for debate, but for certain magic is going to play a big role. 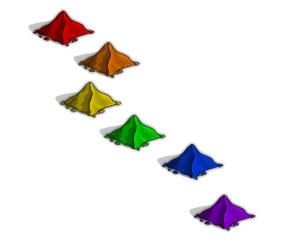 There are an endless variety of magic systems out there from simple magic points (or mana) to having to craft and combine reagents, runes, and even geometrical arrangements of objects. However, since the game does not focus on learning how to become a real wizard (that’s a post for another day), an overly complicated magic system will probably just get in the way of the rest of the game and end up turning people off. On the flip side, using just a magic point system that so many other games out there use always felt a little boring and too simple to me.

So as an experiment I’ve put in a simplistic magic reagent system that is the sole base of how the player will cast spells and see how it feels to play with for a while. Currently there are 6 reagent types, each of which are all visually similar in shape (which is still placeholder art) that stand out from other game items but each have their own vibrant and saturated unique color so you can easily tell them apart.

A fireball might take 2 crimson ash and 1 luminous powder, and that’s it … no mana, no runes, nothing else. I think this system has potential … not only do you have to decide if you should be using this spell vs that spell, what the weaknesses or strengths of the enemy is, but consider the resource cost for the spell vs perhaps using those resources for other something else.

Something else? Yeah … the idea is that those same materials could be used to augment items, create potions, maybe even used as a form of payment for bartering. You might also be able to transmute one type of material into another if you’re not finding the ones you really need once you get yourself to someone or somewhere in the world that can do it.

Another interesting thing this might lend itself well to is the game biasing itself to dropping certain materials. This could be used to help encourage to the player to explore other spells at their disposal if they’re always using the same one, or perhaps even exactly the opposite so they can continue using the spells they like and find effective. Also, biasing material drops in favor of spells that enemies in the current area have a weakness to is a great way to provide a hint and advantage to the player who is paying attention.

2 thoughts on “Materials of Magic”